In the past 50 years, we have been able to observe and explore what could be defined as the most amazing laboratories in the Universe: black holes and neutron stars. These objects, often called compact objects, uniquely present an environment to test the laws of physics at their extremes: the density in a neutron star reaches values several times higher than nuclear density, magnetic fields are billions of times higher than the Sun’s, and gravity around black holes is so strong as to trap light itself. In this short period of time, we have learned a lot about compact objects, but their best kept secrets are still a mystery to us. The X-ray emission of compact objects presents a rich phenomenology that can lead us to a better understanding of their nature and to address more general physics questions:  Colibrì will be able to investigate these questions to a new level, thanks to its unprecedented throughput, spectral and timing resolution in the 0.5-20 keV range. 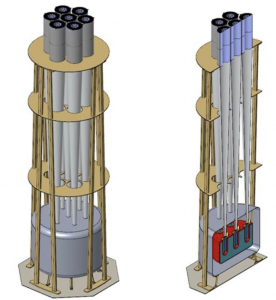 The Colibrì concept is based on multiple aperture non-imaging X-ray collectors similar to NICER but with cryogenically cooled transition edge detectors.  These detectors, combined with non-focusing optics, yield high throughput, high spectral and timing resolution and high quantum efficiency over a wide range of photon energies.

The key characteristics of Colibrì are its high spectral resolution, high throughput and large effective area, and they can all be achieved by using already mature technologies: thin-foil nested X-ray mirrors and transition-edge sensors as single-photon X-ray bolometers. An array of seven telescopes yields a total effective area slightly larger than the three XMM-Newton telescopes with a focal length of 4.9-metres. This results in a large effective area for high-resolution spectroscopy from 0.2 keV to 20 keV. Colibrì offers a similar energy resolution to the gratings on Chandra and XMM-Newton and to the bolometers on Hitomi SXS, but with ten times the effective area of these missions. It gives a similar energy resolution to ATHENA with lower effective area below about 6 keV, but higher above 6 keV, because of the mirror-design choices.

The second key characteristic of Colibrì is high throughput combined with high-time resolution. The optics are purposefully defocused so that the emission from a source on axis is spread over a large portion of a TES array. Furthermore, seven arrays operate in parallel. This dramatically reduces the likelihood of several photons landing on the same detector element within a short time, which would result in poor energy measurements, pile-up and lost photons, and allows to sustain count rates a factor of 1,000 larger than ATHENA. Furthermore, because the individual detector elements relax more quickly than those planned for ATHENA, and there are seven arrays operating in parallel, Colibrì will over-perform ATHENA by more than a factor of ten in count rate even if ATHENA offers a defocused observing mode. Colibrì's rapid sampling of the TES arrays will achieve a time resolution similar to that of NICER and a factor of one-hundred finer than ATHENA.

Feedback mechanisms on all scales